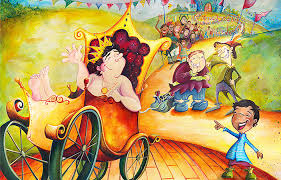 Tom Gleeson 's work on TV is such a welcome , if somewhat risky and scary thing .  He's speaking for all of us men too frightened now to speak and stand up for ourselves. He's speaking for all those facing the stultifying effects of imposed political correctness.
If we did what he did in real life we would be  stoned in the street like that bloke on the Vic Govt ad who carelessly asks his girlfriend to listen.


Peter Ustinov reminds us that comedy is just a funny way of being serious . Tom Gleeson doesn't appear to be too serious but his style enables the serious to surface  - making him a good to very good reporter as well as a comedian .
Lets see more young people on TV especially those with experience and not handicapped by a hard controlling vein of cynicism or false optimism .People who do the calling of proper reporting .

Hard balance to hard to keep . IMO it's not the job of the ABC to make/state the issues but to report /let them hit the fan . Gleeson like Sitch is opening doors deliberately closed  .Reformation .Freedom of Speech and thought .

GK Chesterton said of his friend GB Shaw that having abandoned the idea and power of the golden rule , he was committing us all to the iron rule. Such is the situation we face when we don't teach the basics. No hard chat on resolving conflict , poor attitude self justification , projection and excuses and nice talk  etc
you add some

All hands to tha some one who scares us into weeding the garden , She could be a child . http://unweeddgarden.blogspot.com