To weed or not to weed -is that the question?

We live in a unweeded garden hampered constantly by the unproductive and destructive. If we accept Jesus call to not  personally judge ( Wheat and tares parable) what do we do to manage the evil in our midst ?

Posted by Johnniem at 7:51 PM No comments:

Grass and Gardens in the Fertile Crescent -- key drivers

I like the idea of a Renaissance. A world view change that helps us stand back  - to see real drivers

The West is back in Babylon, but its not effective .
Maybe, just maybe it doesn't think straight or deep enough . Typically rich societies have gardens but don't weed them properly ( A process  which keeps them attractive effective and sustainable )

"The most costly wars the US has ever been involved in"  As Antony Lowestein, David Finkel and Abbas all said in festival of Dangerous Ideas ( ABC Big Ideas ) you should NOT expect the war industry to know what its doing - they are market driven ( well put by Lowenstein) and so is our stupid politics .

Finkel said it best - THE  JOB  is not to judge but to understand and embedding,   if in name only is worse that not going ;       standing back well enough and giving some objectivity  is Key  ,What you think ( AUTHORSHIP )


I like the idea of a Renaissance
My reason is we are living in a kind of dark ages not unlike those that stultified Europe for hundreds of years .As I understand it these DA's were 100's of years where worship of nature took over the minds of men and turned the glass half full into a huge long lasting slough of despond over man' s ability to help himself - in itself , a quite correct and correcting piece of metanoia ( see ABC radio's excellent series on 20 centuries in 2000) .
Presumably God seemed distant at times (eg black death ) but why did the DA's last so long- through and despite "success" Perhaps it was the very success of "engineering" the world that stopped them seeing that technology and talk of harmony and order wouldn't solve man's basic problem. I just posted on the strange contradictions in this area of the" The fertile crescent" which is currently STILL frightening us with WAR We have our very own fertile crescent with same risks sheep aridity and soils- called the Riverina and i will not call its real risks of degradation determinative -- unlike dumb and careless others , Ask me if you want more detail on this complex issue ( science plus green politics etc  )
I can see this disease and heavy footed tramping all around me . can you? Think of the wonder of a good garden - in symbolizes the energy to put some order in a work with nature, We are by careless thinking on environment risk ( my profession) denying the opportunity to enjoy the idea to our children , http://designwithnature.blogspot.com
We should never see technology and imposed order (Both intransigent World views of the powerful ( cf us the garden elements) on both sides of the War) as the answer 2 our problems as we still do 100000's of years after the first civilizations in the Lavant.
Think of the myopic vision of the gardens of Babylon. We now know how to keep them growing, but we are STILL meddling badly and reactively with sheep driven politics on the borders. The Devil distracts us.
The powerful post renaissance people used the new idea of freedom to licence their lack of restraint .Holding a good balance starts with knowing how it CAN work at home .( Conservation that works can inspire us and our children ,) The sheep eating a failed crop in a settled aussie system in Riverina 2014 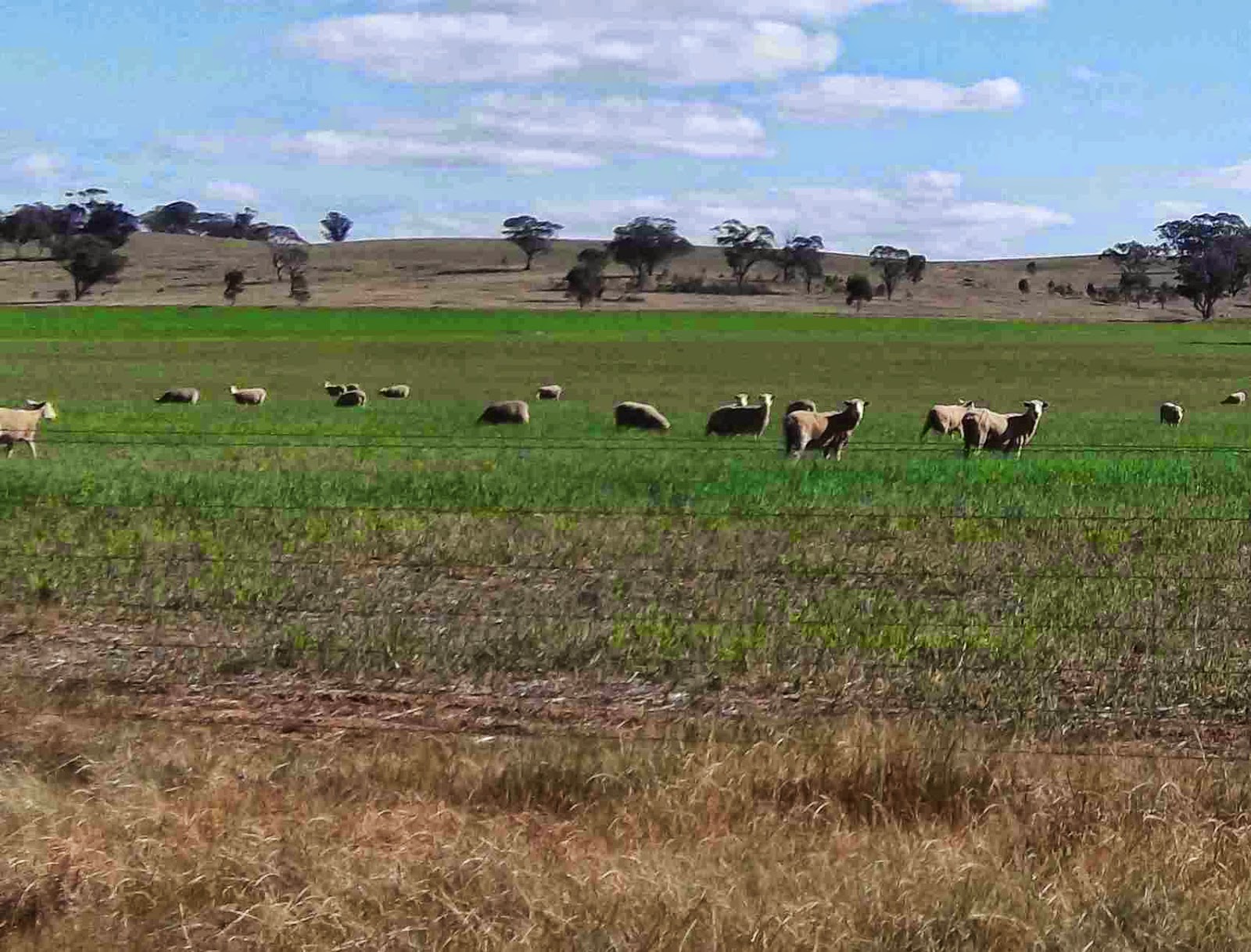 Posted by Johnniem at 7:02 PM No comments:

Ellul and Whitehead wouldn't probably be too surprised at the cul de sac we find ourselves in in 2014 . We talk science but we don't live it .Our kids aren't studying the hard stuff and we don't insist they do. ( not thinking clearly!) We talk love of science when Ellul said we really love technology.We invest out time and energy in thinking technology and not science os jobs in science go elsewhere and we try to live trying to manage the machinery.
Our non scientist leaders tell us to worship something they don't understand . If our leaders really were rational and out front  they would tell us to listen to scientists and study the subject to make sure we were following the rules - hard work,  building and slow progress .
Instead we have our societies rushing to invest in the lastest  theory and substance.
We have Our ABC  advocating the Gospel of Grace by Change alone . .The presenters  don't study science and the substance of good things well enough to know that many good things don't change in nature ,  but often only change in name.

If they understood what they were doing better they would help us invest in reform rather than turn the past into refuse wasting money in reinventing, not reusing  and revolutions that go nowhere sustainable


You'll know if you read any of my stuff that I see us disippating our kids future and creating a  really flat wasteland of worshipful change .
To rework Hamlet


How weary, stale, flat, and unprofitable
Seem to me all the abuses of technology in this world!
Fie on ’t, ah fie! 'Tis ( still )  an unweeded garden
That grows to seed. Things rank and gross in nature

Possess it merely as a tool.

(Not quite the meaning but it will do )
and get on with trainng as we once did ( Physics and Chemistry) for true sustainability
Posted by Johnniem at 9:03 PM 2 comments:

The toxic cult of sentimentality

Theodore Dalrymple has done the world a great service by putting his studied work on the simplicities that stuff us up into print .

We are as a culture , a bunch of wooses and we don't know why
Western literature of the past is not sentimental ( Bible , Shakespeare ) but we are afraid to offend . Bit more here
Posted by Johnniem at 5:40 PM No comments: